I am a Bentson Radiation Oncology Research Fellow in the Department of Human Oncology. I have an MD and PhD in biomedical engineering from Case Western University. I am pursuing a career as physician-scientist and one day hope to have my own lab. I currently work in the Morris Lab, where I apply my expertise in mathematical modeling, drug delivery and in situ vaccination to a variety of research projects. One project looks at targeting metastatic disease through a combination of killing suppressive immune cells and using systemic immunotherapy agents. An exciting aspect about immunotherapy is that it could potentially work on a variety of cancers. Cancer has the ability to evade the immune system, so if we can figure out how to activate the immune system to recognize someone’s cancer, I think we can use those concepts on a wide variety of tumors.

The broad goal of my research focus is to utilize radiation therapy to immunomodulate a tumor microenvironment to enhance the efficacy of immunotherapy treatments in solid tumors. My focus is on translational research first in preclinical models to optimize dosing, timing and efficacy of combination treatments with the goal of translating these findings in the lab to early phase clinical trials in patients. I hope to use data that we gather in the laboratory setting to gain mechanistic insights into how radiation interacts with tumor cells as well as a patient’s immune system. My ultimate goal is to design treatments that will result in improved patient survival and eventual cures in cancer patients with metastatic disease.

Radiation has been shown to synergize with systemic checkpoint blockade and improve its efficacy in multiple preclinical cancer studies. However, as clinicians when we have tried to translate these results to the clinic to improve outcomes in patients, we have had much more mixed results. There are several explanations for these lackluster results, including increased heterogeneity in spontaneously occurring tumors as well as more difficult to treat bulky and widespread disease in real-life patients compared to small single site disease studied in preclinical models. One strategy to overcome these challenges is to deliver immunomodulatory radiation to all sites of disease in a patient with metastatic cancer. Therefore, we developed a collaborative project with Dr. Jamey Weichert’s laboratory in the Department of Radiology to develop a molecularly targeted radionuclide (MTRT) that can deliver low dose immunomodulatory radiation to all sites of disease in patients with metastatic cancer. This MTRT agent, NM600, can be chelated to several different radionuclides to tailor radiation dose rate and delivery to different types of tumors. Moreover this MTRT agent has selective uptake into almost all tumor types, including more than 70 human and mouse tumors that have been tested. Preclinical work that I have led has shown that 90Y-NM600 MTRT has selective uptake into tumors and can improve the efficacy of immune checkpoint blockade in models that do not normally respond to this therapy. We are looking forward to translating this therapy into the clinic to help improve outcomes in patients. 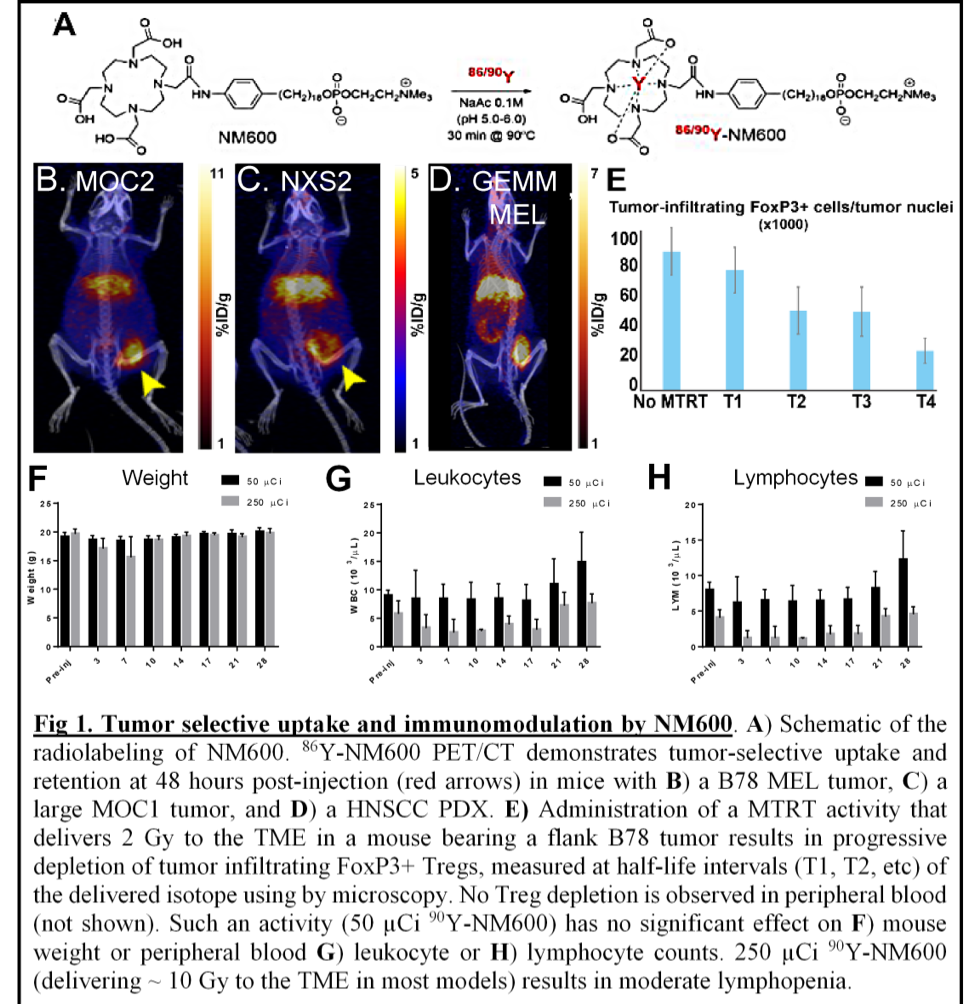 Combination of radiation and innateimmunity stimulating nanoparticles is an area of significant research interest for in situ vaccination strategies. However, the potential interaction between radiation and the immune response to such nanoparticle therapies has not been thoroughly investigated. I am leading a collaborative project between the Morris Lab and Gong Lab in Biomedical Engineering to investigate a novel smart polymer particle that stimulates the innate immune system. This particle is composed of a bacterial membrane, toll-like receptor 9 agonist, and STING agonist that are combined to enhance uptake of cancer antigens into antigen presenting cells (APCs), activate APCs, and then prime adaptive immunity T-cells to create an anti-tumor effector immune response. Using intratumoral injection ofthese smart nanoparticles following local radiation we demonstrated an in situ tumor vaccination effect capable of augmenting tumor response rates in multiple preclinical tumor models. 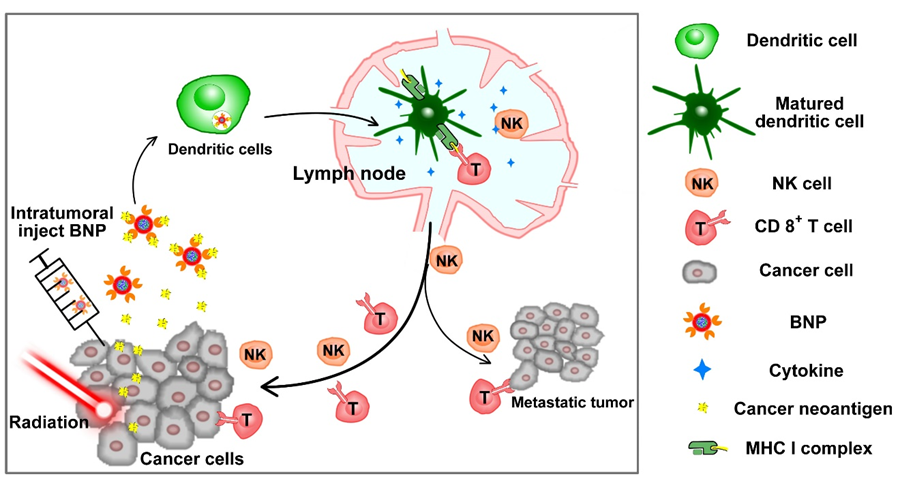