I am an associate professor in the Department of Human Oncology specializing in treatment of breast and gynecologic cancers. In the clinic, my primary goal is to come alongside women and their families who are facing a cancer diagnosis and work together to identify a thoughtful treatment approach that best fits their cancer and life situation.

Through clinical research efforts, I strive to make radiation therapy an easier and more successful journey for women in the future. This includes the use of treatment methods that may be completed more quickly and/or limit radiation dose to nearby parts of the body. Accelerated partial breast irradiation (APBI), hypofractionated (short duration) whole breast irradiation, MRI-guided external radiation and brachytherapy are just a few examples of the treatment options that women may benefit from.

At the University of Wisconsin, I work with residents and medical students on a daily basis. I enjoy getting to know the trainees who come through the radiation oncology clinic, learning about their goals and helping them achieve those goals by building their clinical skills and research experience. Investing in bright, upcoming health care providers produces a ripple effect of caring and innovation, which can impact the future of medicine in a far greater way than the work of a single person.

Traditional radiation therapy requires multiple treatments and may cause side effects in surrounding healthy tissues.

The University of Wisconsin is one of the first radiation oncology clinics in the world to offer treatment with the ViewRay treatment system. This allows us to monitor patients with MRI in real time before and during the delivery of radiation therapy, ensuring the most precise treatment possible. I am utilizing this technology to learn more about the motion of breast tissue (i.e., post-operative lumpectomy cavity) and other adjacent healthy organs (i.e., lung) between and during radiation treatments.

Traditionally, nearly all women undergoing partial mastectomy for early-stage breast cancer received approximately six weeks of once-daily radiation treatments directed at the whole breast. Many options now exist that allow certain women to receive approximately one week of radiation treatments directed only to the portion of the breast affected by cancer (APBI). Soon, we will be offering women a novel option for receiving a total of three MRI-guided ViewRay APBI treatments precisely targeted to only the affected portion of the breast. 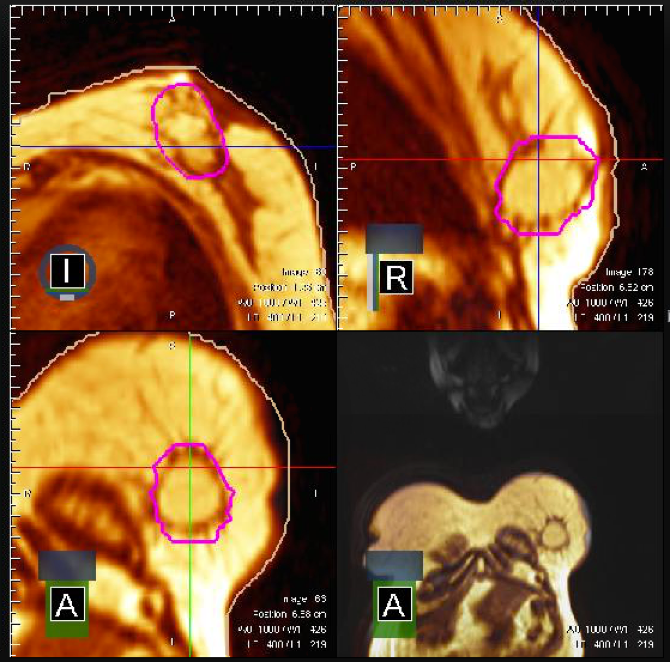