As professor and chairman of the UW Department of Human Oncology, principal investigator for the Wisconsin H&N SPORE Grant and member of the UW Carbone Cancer Center Senior Leadership Council, I facilitate the interaction of investigators involved in basic, translational and clinical cancer research activities. I am deeply committed to the leadership of multidisciplinary clinical, teaching and research teams.

The overall theme of my clinical and laboratory research is to improve treatment outcome for patients with head and neck cancer (HNC). Areas of particular research emphasis include the interaction of molecular growth inhibitors combined with radiation and the use of conformal radiation treatment techniques to limit normal tissue toxicity. I serve as PI for a recently funded SPORE Grant in HNC at the University of Wisconsin and direct one scientific project as well as the Administrative Core within the SPORE Grant. I have previously served as PI for NIH R29 and R01 laboratory research grants investigating HNC response and resistance mechanisms in combination with radiation. I have been an active RTOG HNC Committee member for more than 20 years (now NRG) and serve as PI or co-PI for a series of national and international HNC trials.

Serving currently as president of ASTRO, a major focus is to illuminate the tremendous power and precision of radiation to heal, to cure, to image, to improve human health and quality of life. We convey this message most effectively through storytelling, the passionate stories of patients and families whose lives have been saved or extended by the expert application of radiation. A unique and highly appealing aspect of radiation oncology is the opportunity for close collaboration between technology, biology and clinical medicine. Never before have the prospects for impactful advances in our field been so bright, and many of these advances involve multi-investigator teams, working together to achieve new milestones.

Teacher of the Year in Radiation Oncology, University of Wisconsin (1998)

Teacher of the Year in Radiation Oncology, University of Wisconsin (1991)

Society of the Cincinnati Scholarship for Academic Achievement (1982)

Paul A. Warren Scholarship for Excellence in Genetics (1980)

American College of Radiology, Committee on Residency Training in Radiation Oncology of the Commission on Education (1996–2007)

Program Committee, 4th Research Conference on the Biology, Treatment and Prevention of Head and Neck Cancer (1992–1994)

Associate, University of Wisconsin Center for Tobacco Research and Intervention (1992–2010)

Radiation is a central cancer treatment modality often limited by normal tissue tolerance. The Harari lab investigates how molecular signaling pathways can modulate tumor response to radiation. We explore new approaches to improve radiotherapy outcomes by enhancing tumor cell radiosensitivity and by decreasing radiation toxicity to normal tissues. We focus on a series of promising molecular agents that target various cellular signaling pathways including growth factor receptor signaling and others as shown in the adjacent figure. Close coupling of the laboratory work to the clinical arena has enabled successful translation of promising laboratory findings into single institution and multi-institutional clinical trials. 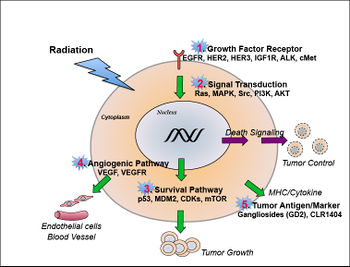 Our research commenced with epidermal growth factor receptor (EGFR) targeting agents, cetuximab in the late 90s and several others (gefitinib & erlotinib) thereafter. Promising preclinical findings with cetuximab contributed to a landmark Phase III clinical trial in patients with advanced head and neck(H&N) squamous cell carcinoma that confirmed a survival advantage with the addition of cetuximab to radiation. This compelling result provides powerful stimulus to explore the combination of radiation with other receptor targeting agents explored in our lab including various IGF-1R and angiogenesis/VEGFR targeting agents.

Despite the tremendous promise of EGFR targeting agents in cancer therapy, many patients develop acquired resistance to therapy over time. Efforts to understand the underlying mechanisms of acquired resistance and improve the effectiveness of EGFR targeting strategies and radiation provide a primary research theme in recent years. These include efforts to combining EGFR inhibitors with other molecular targeting agents and the study of new generation EGFR inhibitors with unique properties based on improved molecular understanding of HER family signaling systems. The timeline below highlights many of the accomplished and current research themes in our lab along with several important milestones in the field of EGFR research related to cancer therapy. 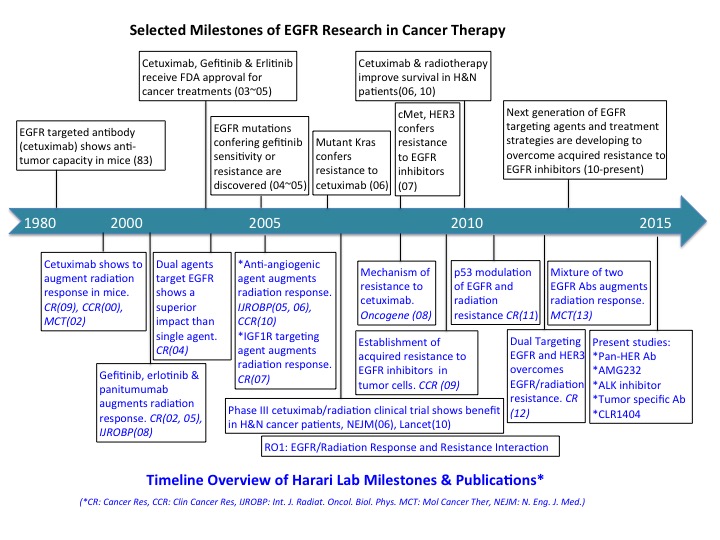 Project: EGFR Family: Pan-HER Ab(Sym013), a mixture of monoclonal antibodies (mAb) that target EGFR, HER2 & HER3

Increasing evidence implicates that other EGFR family members, such as HER2 and HER3 provide compensatory signaling to bypass individual targeting of EGFR (see figure). Sym013 targets EGFR, HER2 and HER3 simultaneously and may prove highly valuable to advance the overall impact of EGFR therapy in cancer and help address the challenge of acquired resistance. 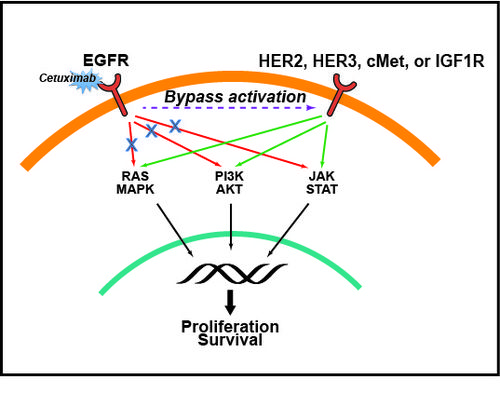 Our previous studies revealed p53 as a critical factor in regulating acquired resistance to EGFR inhibitors and radiation. In addition, the activation of p53 results in radiation-induced cell cycle arrest, senescence or apoptosis. The combination of radiation and AMG232 which prevents MDM2-induced p53 degradation may offer a valuable treatment strategy in primary tumors or tumors with resistance to EGFR inhibitors. 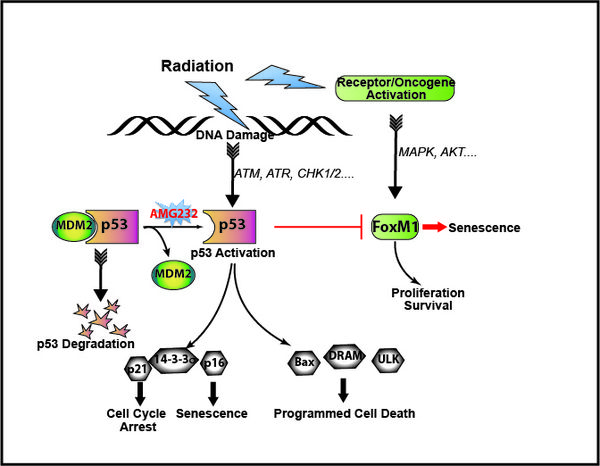 ALK is a receptor tyrosine kinase (RTK) encoded by the ALK gene which is oncogenic when fused with several particular genes, including echinoderm microtubule associated protein like gene (EML4). EML4-ALK fusion occurs in 2% to 7% of patients with non-small cell lung cancer (NSCLC). Our interest is to examine the role of ALK in radiation response and the antitumor effects of Crizotinib and Ceritinib in combination with radiation in EML4-ALK positive NSCLC. We are also investigating the effect of combination of ALK inhibitor and EGFR or c-MET inhibitor on cell survival and radiosensitivity in EML4-ALK-positive NSCLC. 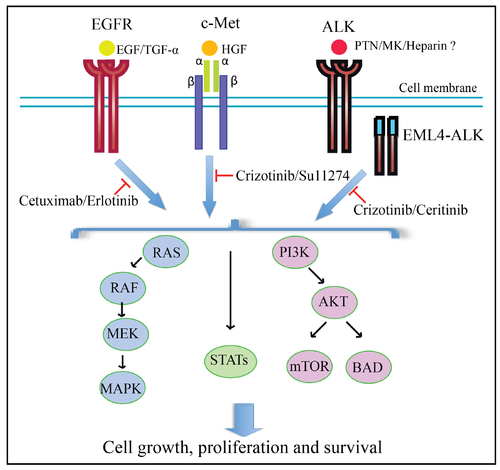 CLR1404 provides the opportunity for tumor-selective internal delivery of radiation thereby enabling combination with reduced dose external beam radiation in the treatment of H&N cancer. This agent shows selective accumulation and retention in human tumors across a broad spectrum of animal models (over 50 xenograft models to date including our H&N patient-derived xenografts), and in our first human H&N patients tested. CLR1404 is a radiolabeled phospholipid ether analog with powerful potential as an imaging agent (labeled with 124I) and as a therapy agent (labeled with 131I). This “diapeutic approach” (diagnostic and therapeutic) exploits the unique capabilities of this molecule as outlined in this proposal. CLR1404 is an alkyl phosphocholine, the lead compound emerging from over 15 years of laboratory investigation. Plasma membrane lipid rafts serve as the portal of entry for CLR1404, and the greater abundance of lipid rafts in cancer cells vs. normal cells provides therapeutic selectivity for this approach. CLR1404 has the ability to specifically target tumors while limiting dose to surrounding normal tissues; a scenario very difficult to achieve in H&N cancer patients, even with the use of highly conformal radiation techniques. 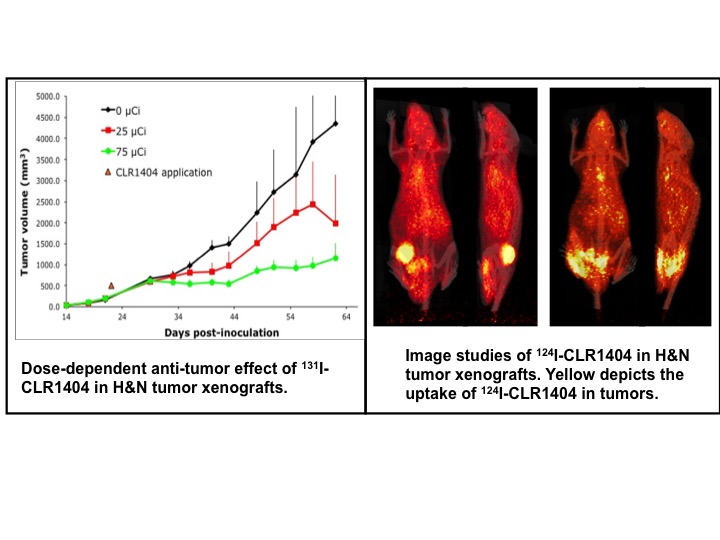 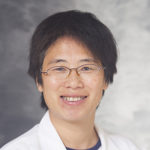 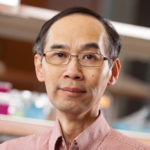 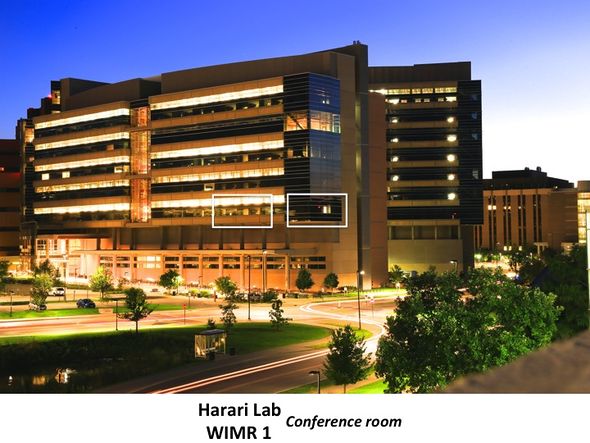 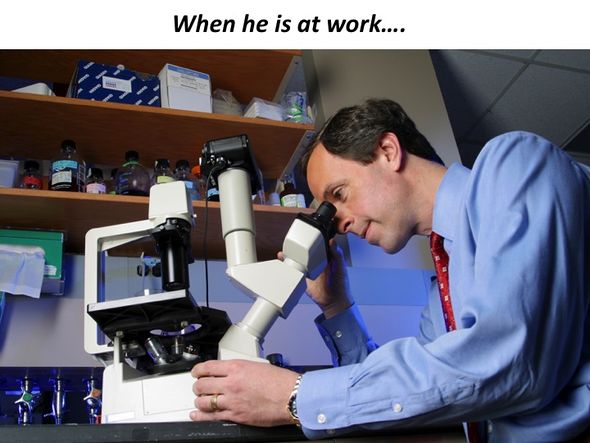 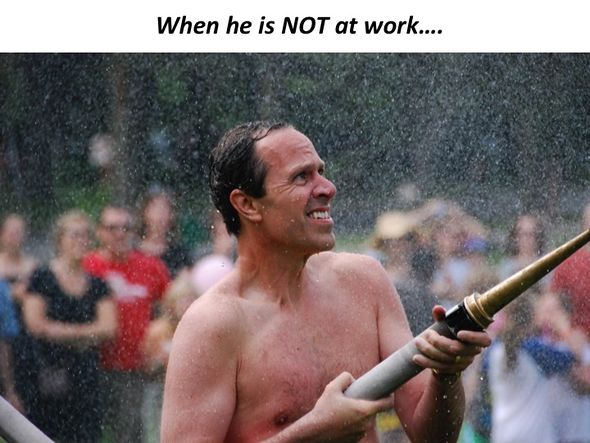