I am a professor in the Department of Human Oncology. My laboratory is focused on understanding mechanisms of resistance to molecular targeting agents directed against receptor tyrosine kinases. Specifically, we center our work on cancers of the head and neck and breast. We use molecular biology, proteomics, mouse modeling, including patient derived xenografts, and human tissues to understand how tumors that are initially responsive to therapy become resistant over time. The overall goal of this research is to identify these mechanisms of resistance and to target specific pathways to increase the efficacy of molecular targeting agents. Ultimately, our goal is to take basic science discoveries in the lab and translate them to the clinic.

In addition to my leadership and research roles, my laboratory provides a rich environment for students interested in pursuing translational research. I teach undergraduate, graduate and medical students as well as postdoctoral fellows. Being within a clinical department provides ample opportunities to interact with physicians and physician-scientists. This interaction allows for meaningful understanding of cancer and the best way for my students to advance their findings to the clinic. Ultimately, we hope our work impacts patients and their families in a positive way.

Dr. Deric Wheeler serves as the director of Translational Medicine and Cancer Biology. His laboratory is focused on understanding mechanisms of resistance to molecular targeting agents directed against receptor tyrosine kinases in cancers of the head and neck and breast.

Resistance to drugs that target cancers cells is one of the most pressing problems in all of oncology.

In the Wheeler lab, we use state of the art molecular biology, proteomics and mouse modeling to understand how tumors become resistant to cancer drugs. Our goal is to identify unique and shared pathways that tumors use to circumvent therapy and translate these findings to the clinic to impact the lives of our patients.

The Role of the HER Family in Resistance to Cetuximab Therapy

Monoclonal antibody therapy has been developed over the past 30 years to target receptor tyrosine kinases (RTKs), which sit on the outer membrane of cancerous cells. These receptors are responsible for activating key pathways in cancer cells that lead to their proliferation and survival. Gene amplification, overexpression and hyperactivity of the epidermal growth factor receptor (EGFR) is frequently observed in non-small cell lung cancer (NSCLC), head and neck cancer (HNSCC), breast and colorectal cancer (CRC). Therefore, the EGFR has been one of the most targeted receptors in all of oncology. Targeting EGFR has been intensely pursued in the last decade as a cancer treatment strategy. One approach uses monoclonal antibodies (mAbs) to target the extracellular domain of the EGFR to block natural ligand binding. Cetuximab (IMC- C225, Erbitux) prevents receptor activation and dimerization and ultimately induces receptor internalization and. Cetuximab exhibits promising antitumor activity as monotherapy or in combination with chemotherapy and/or radiation in head and neck cancer and metastatic colorectal cancer. However, despite initial response, acquired and intrinsic resistance to this promising molecular therapeutic eventually develops. Understanding resistance to antibody-based molecular targeting agents is my labs long-term goal.

In 2008 our lab was the first to report that tumor cells that acquired resistance to cetuximab exhibited dramatic up regulation of the EGFR, secondary to loss of ubiquitination, which led to enhanced signals to other EGFR family members (HER and HER3) that promoted proliferation and survival. More in-depth characterization of cetuximab-resistant model systems led to additional works highlighting the interplay between the EGFR and Src Family Kinases (SFKs) in cetuximab resistance. Ultimately, this work has led to our understanding of targeting SFKs and HER family members simultaneously.  This work has advanced the field, along with other investigators, in combinatorial therapy directed at RTKs in several human cancers.

After thorough investigation on how nEGFR leads to resistance to cetuximab, we turned our attention to successful targeting of the nEGFR signaling node.  In models of cetuximab resistance it was clear that the SFKs were dramatically overexpressed. We showed that SFK inhibition could impact nEGFR levels.  Collectively, this work highlighted a tight linkage between SFKs, EGFR translocation to the nucleus and resistance to cetuximab. However, the mechanism of how SFKs mediate EGFRs movement from the membrane to the nucleus remained unresolved.  In 2012 we published a critical paper identifying the exact SFKs, Yes and Lyn, which directly phosphorylates the EGFR on tyrosine 1101 and showed that this is an early, critical step for nuclear translocation of the EGFR.  This was the first paper to identify the function of Y1101 of the EGFR and how SFKs mediate nuclear translocation, an area for therapeutic intervention. We were the first to publish methods on targeting the nEGFR signaling pathway in NSCLC, TNBC and CRC.  This work culminated in a novel approach to target both EGFR signaling nodes, membrane and nuclear.  Investigations found that targeting both nEGFR, via abrogation of its nuclear translocation with dasatinib, and simultaneously targeting classical EGFR signaling with cetuximab, can lead to robust anti-proliferative effects in numerous cell models of cetuximab resistance. 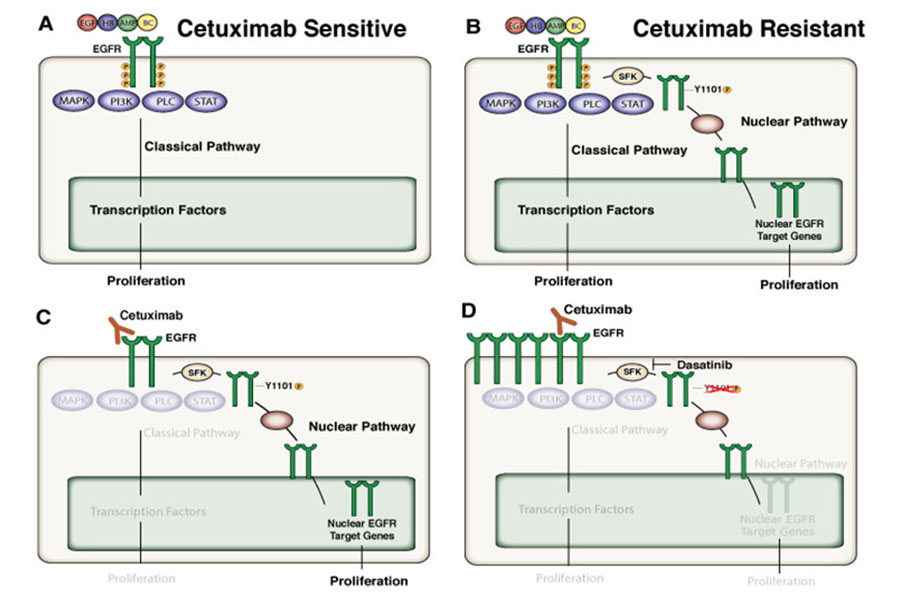 Collectively this work addresses a central problem in the field of EGFR biology and its subsequent targeting as a cancer therapeutic. Current EGFR targeting agents engage only the membrane-bound, tyrosine kinase activity of EGFR and not the nEGFR-signaling network. The innovation of our work lies in the refining and improving paradigms in EGFR targeting and shifting toward targeting the nEGFR-signaling network. It is clear that nEGFR leads to resistance to cetuximab therapy and that by targeting nEGFR we will be able to increase the efficacy of these therapeutic modalities where nEGFR plays a central role. These studies have the potential to improve and refine current EGFR-centric therapeutic approaches in NSCLC, HSNCC and TNBC.

Identification of HER Family Transcriptional Domains

It has been readily reported that HER family members exhibit a novel function distinct from membrane signaling and that is functions of a transcription factor. HER3 is expressed in the nucleus, and therefore we performed a functional mapping of HER3 to identify the individual amino acid sequences in the HER3, and other family members (EGFR and HER2), that confer their transcriptional activity. This will help define the critical elements of the EGFR, HER2 and HER3 that impart its nuclear function so we can approach designing novel allosteric inhibitors to block its nuclear function and target nuclear HER family members in specific cancers. This was the first report identifying the amino acids, which confer transcriptional activity in an RTK.

Role of AXL in Therapeutic Resistance of NSCLC and HNSCC

The EGFR antibody cetuximab is used to treat numerous cancers, but intrinsic and acquired resistance to this agent is a common clinical outcome. Studies in our lab have shown that overexpression of the oncogenic receptor tyrosine kinase AXL is sufficient to mediate acquired resistance to cetuximab in models of non-small cell lung cancer (NSCLC) and head and neck squamous cell carcinoma (HNSCC). We showed that AXL was overexpressed, activated and tightly associated with EGFR expression in cells resistant to cetuximab. Further, we found that AXL activation stimulated cell proliferation, EGFR activation, and MAPK signaling in models of cetuximab resistance. Notably, EGFR directly regulated the expression of AXL mRNA through MAPK signaling and the transcription factor c-Jun in cetuximab resistant models, creating a positive feedback loop that maintained EGFR activation by AXL. Using cell line xenograft and patient-derived xenograft models, AXL was overexpressed and activated in tumors that displayed intrinsic resistance to cetuximab. Collectively, our results identify AXL as a key mediator of cetuximab resistance, providing a rationale for clinical evaluation of AXL-targeting drugs to treat cetuximab-resistant cancers.

In further studies, we found AXL to be highly over-expressed in several models of HNSCC, where AXL was significantly associated with higher pathologic grade, presence of distant metastases and shorter relapse-free survival in HNSCC patients. Further investigations indicated that HNSCC cells were reliant on AXL for cellular proliferation, migration and invasion. Additionally, targeting AXL increased HNSCC cell line sensitivity to chemotherapy, cetuximab and radiation. Moreover, radiation-resistant HNSCC cell line xenografts and PDXs expressed elevated levels of both total and activated AXL, indicating a role for AXL in radiation resistance. Collectively, this work has provided evidence for the role of AXL in HNSCC pathogenesis and supports further pre-clinical and clinical evaluation of anti-AXL therapeutics for the treatment of HNSCC patients.

The TAM (TYRO-3, AXL, MERTK) family receptor tyrosine kinases (RTKs) play an important role in promoting growth, survival and metastatic spread of several tumor types. AXL and MERTK are over-expressed in head and neck squamous cell carcinoma (HNSCC), triple-negative breast cancer (TNBC) and non-small cell lung cancer (NSCLC), malignancies that are highly metastatic and lethal. AXL is the most well-characterized TAM receptor and mediates resistance to both conventional and targeted cancer therapies. Since AXL is over-expressed in aggressive tumor types, cancer patients are currently being enrolled in clinical trials testing AXL inhibitors. In the current study, we analyzed the effects of AXL inhibition using a small molecule AXL inhibitor, monoclonal antibody therapy, and siRNA in HNSCC, TNBC and NSCLC preclinical models. Anti-AXL targeting strategies had limited efficacy across these different models, which our data suggests could be attributed to up-regulation of MERTK. MERTK expression was increased in cell lines and patient-derived xenografts treated with AXL inhibitors and inhibition of MERTK sensitized HNSCC, TNBC and NSCLC preclinical models to AXL inhibition. Dual targeting of AXL and MERTK led to a more potent blockade of downstream signaling, synergistic inhibition of tumor cell expansion in culture and reduced tumor growth in vivo. Furthermore, ectopic over-expression of MERTK in AXL inhibitor-sensitive models resulted in resistance to AXL-targeting strategies. These observations suggest that therapeutic strategies co-targeting both AXL and MERTK could be highly beneficial in a variety of tumor types where both receptors are expressed, leading to improved survival for patients with lethal malignancies. 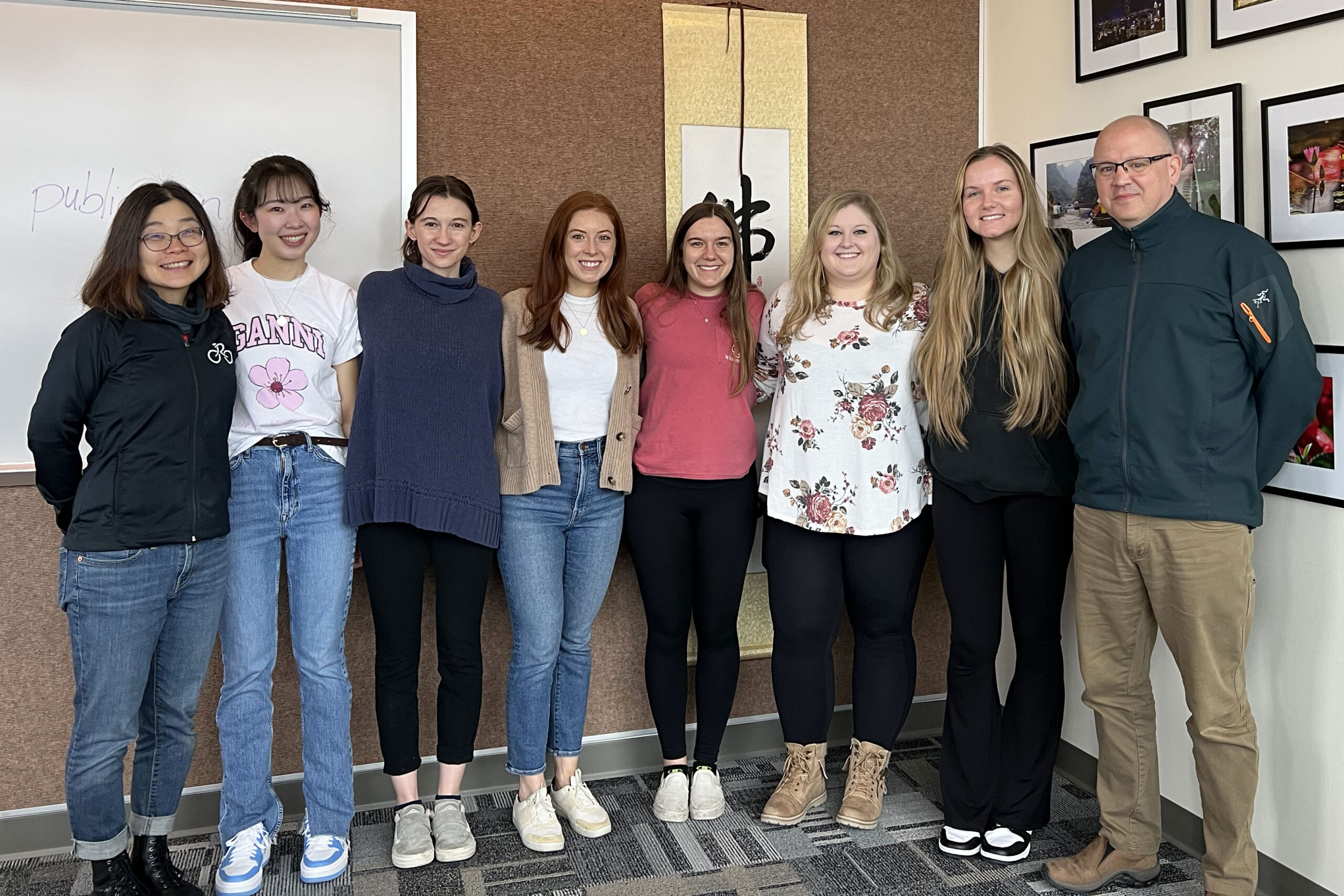